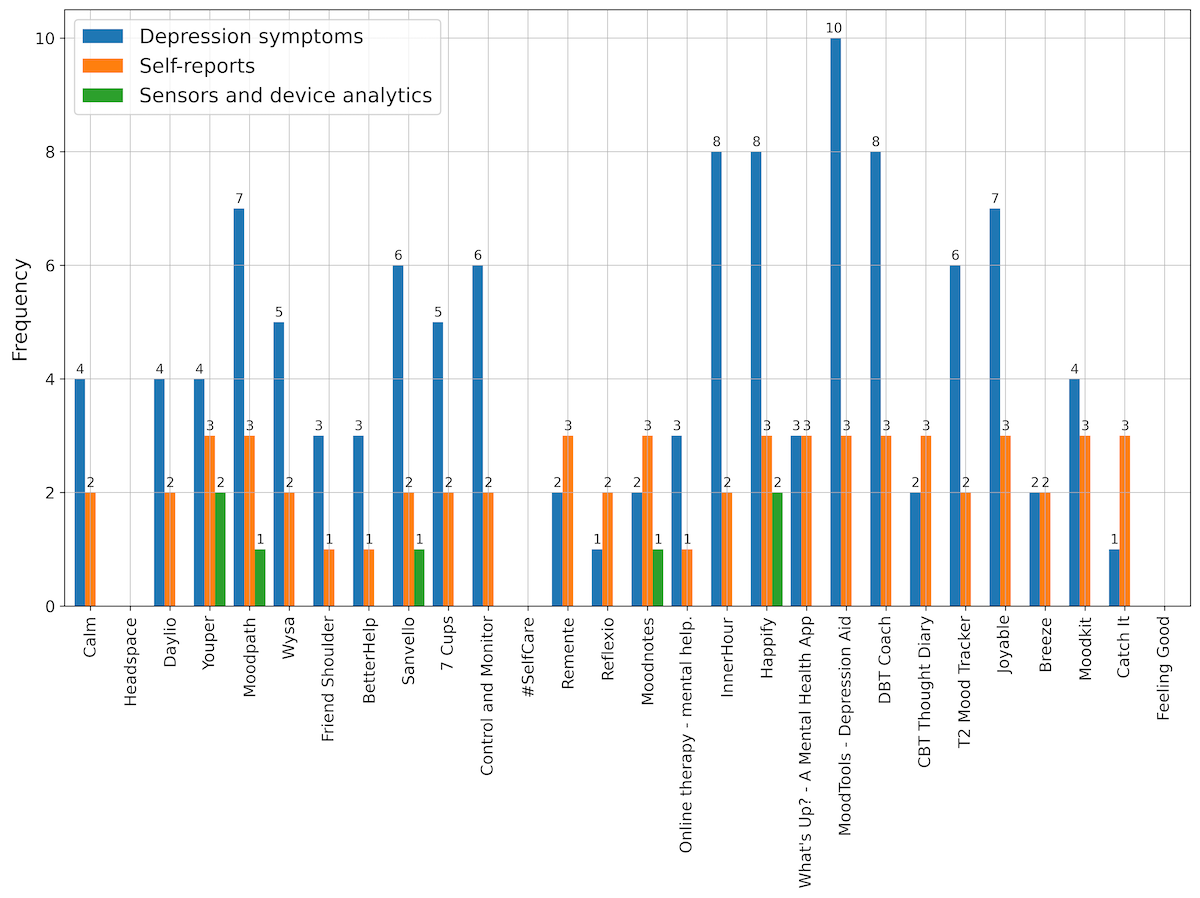 Background: The number of smartphone apps that focus on the prevention, diagnosis, and treatment of depression is increasing. A promising approach to increase the effectiveness of the apps while reducing the individual’s burden is the use of just-in-time adaptive intervention (JITAI) mechanisms. JITAIs are designed to improve the effectiveness of the intervention and reduce the burden on the person using the intervention by providing the right type of support at the right time. The right type of support and the right time are determined by measuring the state of vulnerability and the state of receptivity, respectively. Objective: The aim of this study is to systematically assess the use of JITAI mechanisms in popular apps for individuals with depression. Methods: We systematically searched for apps addressing depression in the Apple App Store and Google Play Store, as well as in curated lists from the Anxiety and Depression Association of America, the United Kingdom National Health Service, and the American Psychological Association in August 2020. The relevant apps were ranked according to the number of reviews (Apple App Store) or downloads (Google Play Store). For each app, 2 authors separately reviewed all publications concerning the app found within scientific databases (PubMed, Cochrane Register of Controlled Trials, PsycINFO, Google Scholar, IEEE Xplore, Web of Science, ACM Portal, and Science Direct), publications cited on the app’s website, information on the app’s website, and the app itself. All types of measurements (eg, open questions, closed questions, and device analytics) found in the apps were recorded and reviewed. Results: None of the 28 reviewed apps used JITAI mechanisms to tailor content to situations, states, or individuals. Of the 28 apps, 3 (11%) did not use any measurements, 20 (71%) exclusively used self-reports that were insufficient to leverage the full potential of the JITAIs, and the 5 (18%) apps using self-reports and passive measurements used them as progress or task indicators only. Although 34% (23⁄68) of the reviewed publications investigated the effectiveness of the apps and 21% (14⁄68) investigated their efficacy, no publication mentioned or evaluated JITAI mechanisms. Conclusions: Promising JITAI mechanisms have not yet been translated into mainstream depression apps. Although the wide range of passive measurements available from smartphones were rarely used, self-reported outcomes were used by 71% (20⁄28) of the apps. However, in both cases, the measured outcomes were not used to tailor content and timing along a state of vulnerability or receptivity. Owing to this lack of tailoring to individual, state, or situation, we argue that the apps cannot be considered JITAIs. The lack of publications investigating whether JITAI mechanisms lead to an increase in the effectiveness or efficacy of the apps highlights the need for further research, especially in real-world apps