Center for Technology and Behavioral Health

Nick Jacobson is a tenure-track assistant professor in the departments of Biomedical Data Science and Psychiatry within the Center for Technology and Behavioral Health in the Geisel School of Medicine at Dartmouth College. His research interests include the comorbidity between anxiety and depression, the role of technology in assessment and treatment, and longitudinal data analysis. He recently developed an anxiety and depression monitoring application entitled Mood Triggers which helps users to learn the triggers of their anxiety and depression in their daily lives. He also created an statistical package (written in R) called the Differential Time-Varying Effect Model (DTVEM) which is used to explore optimal time lags in intensive longitudinal data.

Our field has come a long way in establishing cognitive behavioral therapy as the empirically-supported treatment of choice for a wide range of mental and behavioral health problems. Nevertheless, most individuals with mental disorders do not receive any care at all, and those who do often have difficulty accessing care that is consistently high in quality. Addressing these issues is complex and costly and thus progress has been slow. We are entering an exciting stage in which emerging technologies might offer novel solutions to the treatment gap. This paper discusses a number of technology-enabled solutions to our field’s challenges, including internet-based and smartphone-based cognitive behavioral therapy. Nevertheless, we must remain attentive to potential pitfalls of these emerging technologies. The manuscript incorporates suggestions for how the field may approach these potential pitfalls and provides a vision for how we might develop powerful, scalable, precisely timed, personalized interventions to enhance global mental health.
Sabine Wilhelm, Hilary Weingarden, Ilana Ladis, Valerie Braddick, Jin Shin, Nicholas C. Jacobson
Behavior Therapy, 2019
PDF Source Document 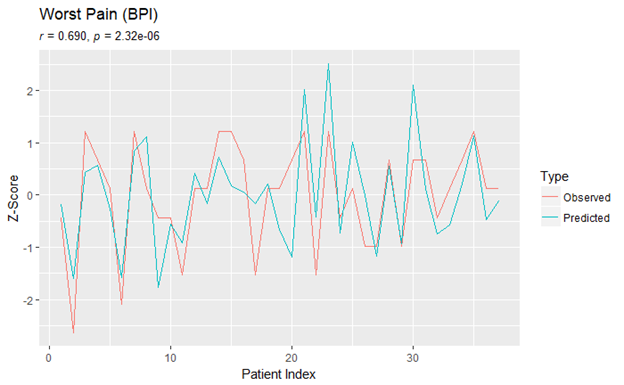 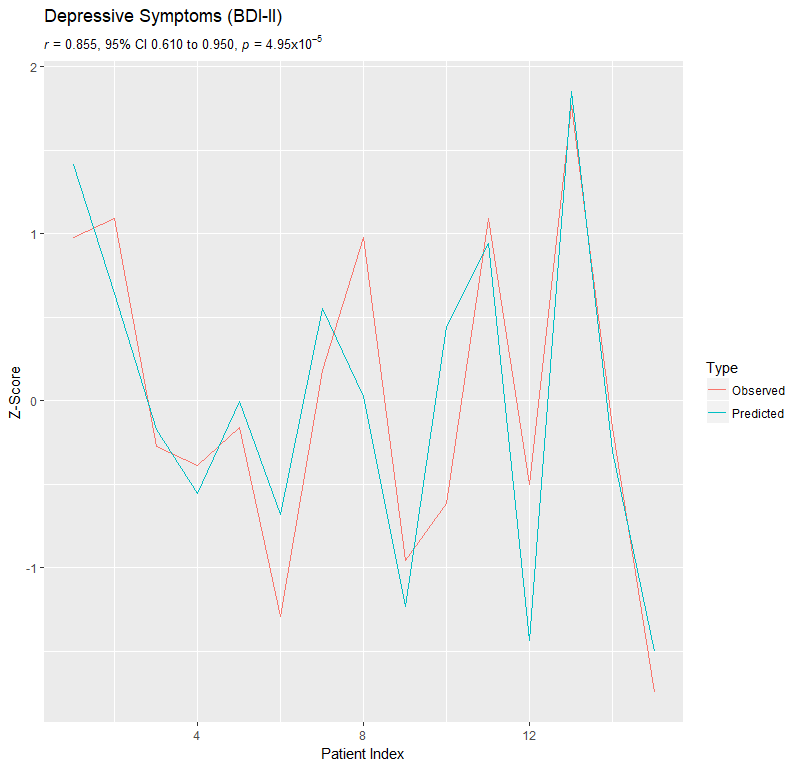 Development of digital biomarkers holds promise for enabling scalable, time-sensitive, and cost-effective strategies to monitor symptom severity among those with major depressive disorder. The current study examined the use of passive movement and light data from wearable devices to assess depression severity in 15 patients with major depressive disorder. Using over one week of movement data, we were able to significantly assess depression severity with high precision for self-reported (r = 0.855, 95% CI 0.610 to 0.950, p = 4.95x10-5) and clinician-rated (r = 0.604, 95% CI 0.133 to 0.894, p = .017) symptom severity. Pending replication, the present data suggests that the use of passive wearable sensors to inform healthcare decisions holds considerable promise.
Nicholas C. Jacobson, Hilary Weingarden, Sabine Wilhelm
Journal of Nervous and Mental Disease, 2019
PDF 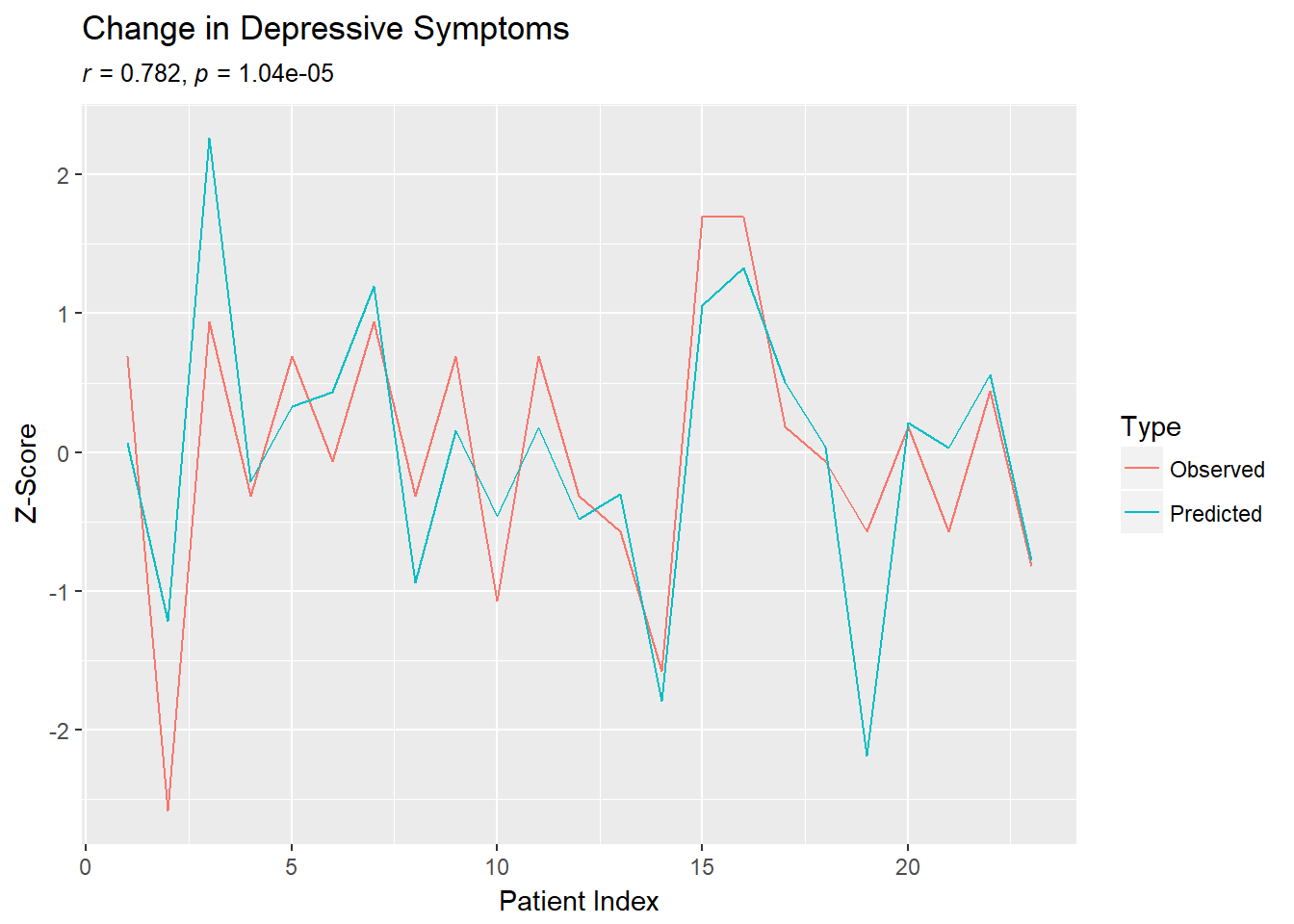 The Effects of Worry in Daily Life: An Ecological Momentary Assessment Study Supporting the Tenets of the Contrast Avoidance Model

With the recent growth in intensive longitudinal designs and corresponding demand for methods to analyze such data, there has never been a more pressing need for user-friendly analytic tools that can identify and estimate optimal time lags in intensive longitudinal data. Available standard exploratory methods to identify optimal time lags within univariate and multivariate multiple subject time series are greatly under-powered at the group (i.e., population) level. We describe a hybrid exploratory-confirmatory tool, referred to herein as the Differential Time-Varying Effect Model (DTVEM), which features a convenient user-accessible function to identify optimal time lags and estimate these lags within a state-space framework. Data from an empirical ecological momentary assessment study are used to demonstrate the utility of the proposed tool in identifying the optimal time lag for studying the linkages between nervousness and heart rate in a group of undergraduate students. Using a simulation study, we illustrate the effectiveness of DTVEM in identifying optimal lag structures in multiple-subject, time series data with missingness, as well as its strengths and limitations as a hybrid exploratory-confirmatory approach compared to other existing approaches.
Nicholas C. Jacobson, Sy-Miin Chow, Michelle G. Newman
Behavior Research Methods, 2018
PDF Project Source Document

Anxiety and depression as bidirectional risk factors for one another: A meta-analysis of longitudinal studies

This study sought to evaluate the current evolutionary adaptiveness of psychopathology by examining whether these disorders impact the quantity of offspring or the quality of the parent–child relationship across the life span. Using the National Comorbidity Survey, this study examined whether DSM–III–R anxiety, posttraumatic stress, depressive, bipolar, substance use, antisocial, and psychosis disorders predicted later fertility and the quality of parent–child relationships across the life span in a national sample (N = 8,098). Using latent variable and varying coefficient models, the results suggested that anxiety in males and bipolar pathology in males and females were associated with increased fertility at younger ages. The results suggested almost all other psychopathology was associated with decreased fertility in middle to late adulthood. The results further suggested that all types of psychopathology had negative impacts on the parent–child relationship quality (except for antisocial pathology in males). Nevertheless, for all disorders, the impact of psychopathology on both fertility and the parent–child relationship quality was affected by the age of the participant. The results also showed that anxiety pathology is associated with a high-quantity, low-quality parenting strategy followed by a low-quantity, low-quality parenting strategy. Further, the results suggest that bipolar pathology is associated with an early high-quantity and a continued low-quality parenting strategy. Posttraumatic stress, depression, substance use, antisocial personality, and psychosis pathology are each associated with a low-quantity, low-quality parenting strategy, particularly in mid to late adulthood. These findings suggest that the evolutionary impact of psychopathology depends on the developmental context.
Nicholas C. Jacobson
Journal of Abnormal Psychology, 2016
PDF Source Document 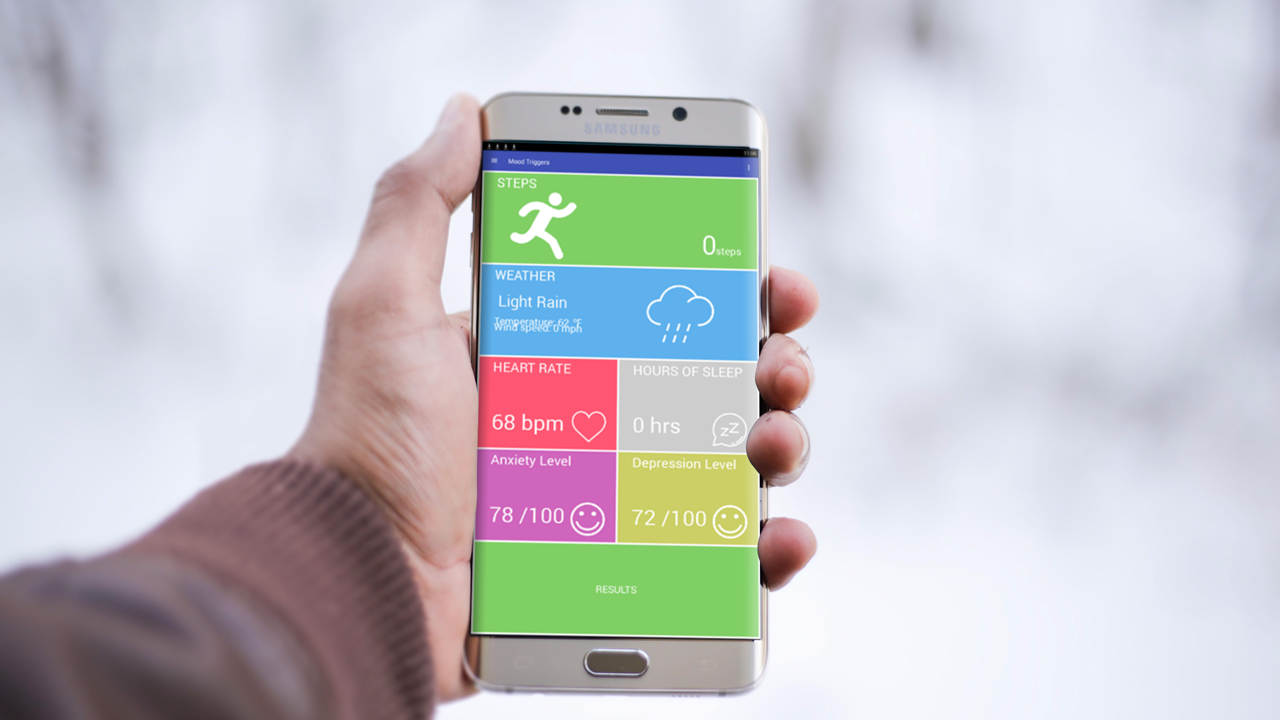 This describes a smartphone application to help users figure out triggers of their anxiety and depression in daily life. 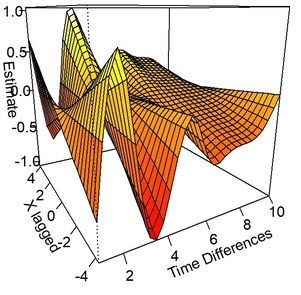 This project describes a novel technique entitled the Differential Time-Varying Effect Model, which is a tool to explore lags in intensive longitudinal data.

I have taught the following courses at Pennsylvania State University:

We are currently recruiting:

The current lab has many foci concentrating around:

To be a graduate student, you must first gain admission to a graduate program within Dartmouth College. The lab focuses on problems which are highly interdisciplinary in nature, intersecting psychiatry/clinical psychology, computer science/computer engineering, and data science/statistics. Graduate programs of interest could include, but are not limited to, the following degree programs:

Postdoctoral students within the lab may be recruited through the National Institute on Drug Abuse (NIDA) T32 program. Postdoctoral students are expected to get involved in all areas of the lab, including: (1) digital mental health and (2) statistical analysis of longitudinal data. In addition to all of the lab interests specified above, a specific area of emphasis within the T32 will be addressing the complexities of co-occuring substance use and other mental health disorders. The fellow is expected to conduct research that will evaluate co-occuring disorders (i.e. substance use and mental disorders). Postdocs will be expected to develop project ideas, write grants, conduct analyses, mentor other lab members, and write and submit manuscripts.

Alternative funding opportunities may also be possible by applying for post-doctoral grants.

The lab tackles many interdisciplinary problems that are best addressed by team-science approaches, and we welcome the involvement of collaborators within both academia and industry. If you are interested in collaborating with the lab, please contact Nick directly (njacobson88@gmail.com).